What’s the best portable toilet for my event?

Portable toilets come in many different shapes and sizes with different functionality and applications. When renting a portable toilet, it can become daunting to figure out what type of toilet you will need for your event.

In this article, we will cover the main types of toilets and their applications. We will discuss the price points as well as the pros and cons of each type.

We all know (and some of us hate) the “port a potty”. These, normally blue, soldiers can be seen on full parade attention at most events. They are in all essence unavoidable.

Then why are they so popular? The answer is that they are cheap. Their starting price-range is from $18 to $100 per toiler per day and upwards. Dependent on the location and duration of your rental.

But there is some information you might want to know, to arm yourself for your next event if you want these soldiers to be part of the army. 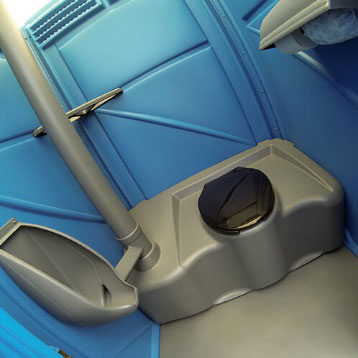 The non-flush (straight drop) port a potty is by far the most common type of potty around. And as you would have guessed by now the cheapest.

What makes this type of potty so distinctive is the lack of any obstruction or barrier between the user and the sewage in the tank. You are able and likely to see the sewage at the bottom of the tank before you take your place on the throne.

The smell is normally reduced and managed by adding a blue liquid into the sewage tank before use. This normally helps, but when it gets very hot or the toilet is left un-serviced for a few days then the chemical normally loses some of its effectiveness.

You will also most likely know of someone who has lost their keys, phone, or massive diamond ring into this soup.

Now in most cases, if you have cleaners onsite and cleaning them 24/7 during your event, then they can be bearable. But they are by no means the toilet of choice. 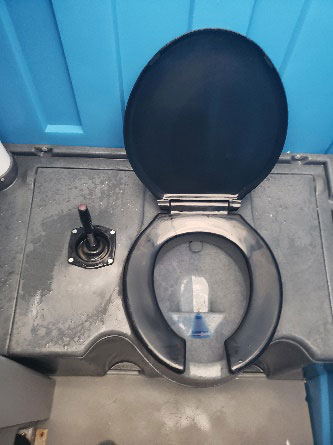 But all is not lost when looking at these blue plastic toilet soldiers.

The flushable potty is a small improvement that some clever designers at the potty factories invented. This makes the potty experience more pleasant.

In all essence, they took a normal non-flush porta potty and installed a barrier between the seat and the tank. This is just a cone-shaped plastic piece that in some models just curve to the side and in some models have flap the separate the seat area form the tank.

The toilet flushes using the blue water from the sewage tank. Now, this sounds worse than it is, as long as you don’t leave the toilet too long and in very hot weather (similar to the Non-flush potties) then they should be just fine.

The flushing is done by a hand flushing lever situated next to the toilet seat, or a foot pump situated somewhere on the floor of the unit. The foot flush is by far the most preferential way of flushing. Using a handle to flush that several people before you, comes with its drawbacks. 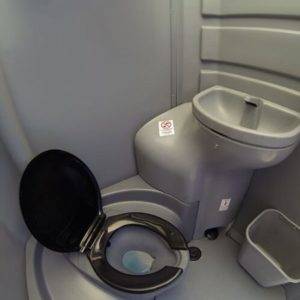 These flushable porta potty units are lightyears betters than the standard non-flush units. But as you might have guessed they come at a higher price, and not without its drawbacks.

Having this barrier between your bum and the scum is much nicer than the alternative but it also means that you must flush. Now, this might seem a bit strange but not everyone flushes after they go, especially during a high turnover event with rows of people waiting to use the toilets.

So if you have thousands of people at an event and you have limited staff members available then it might be the best idea to go with the standard non-flush potty as the flushable units might leave you with a load of blocked toilets.

If you have fewer people at the event and/or you have staff available to supervise the toilets, then the flushable port a potty is a must.

Now if you have someone to impress and still want to work with a small budget then the freshwater flush port a potty is the way to go. It is similar to the flushing port a potty, but it uses fresh water to flush. These units are super nice when it comes to port a potty, but they can get quite expensive. 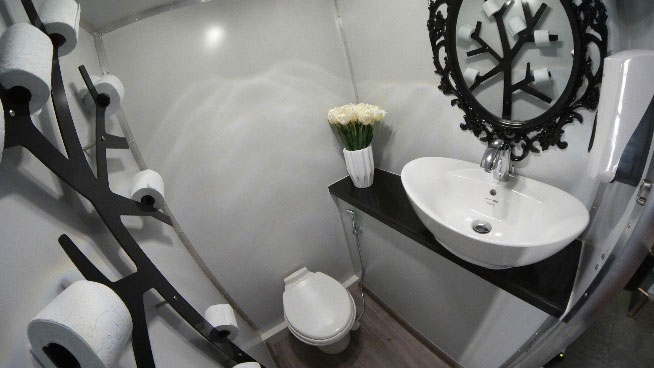 With regard to value for money, a standalone VIP portable toilet option is by far the best option when it comes to portable toilets. The concept is fairly new and was taken from the VIP trailer type toilets and simplifies it.

These standalone VIP toilets are normally solar powered and have all freshwater and sewage tanks included in the design of the unit. They have batteries built into them that stores the power generated by the solar panels and uses it during the dark nighttime hours.

They have modern amenities and regular flush toilets. These units are fitted with hand wash basins and automatic taps. They have lights and can also have air-conditioning and heating, but they normally don’t have this feature.

A good example of their units is the EcoBox provided by EcoLoo. These units come and single seater units and double units that are fitted with two separate cubicles. These toilets are fitted with real granite countertops, ceramic handwash basins with automatic taps. They are fitted with framed mirrors and vinyl wood flooring.

Other companies also provide similar units and they all have similar benefits and drawbacks.

The best benefit of these units over any type of other unit is that they provide you with the best value for money. They are super nice and, in some cases, can be rented for the same price as a flushing port a potty. Starting at $450 for a double unit per 24 hrs.

They are smaller and take a lot less space than conventional VIP trailers, which has a towing hitch and jockey wheel.

These standalone units can be packed in rows, U shapes, L shapes, back to back and any other configurations required.

The drawbacks are they are difficult to move. Due to the fact that they don’t have wheels, they cannot be moved around as easily as the trailer would be moved around. They normally arrive on site by flatbed truck or in EcoLoo’s case a small flatbed trailer. They can be placed onsite by a crane fitted to the truck. If you have a lot of units to be delivered, then it might be wise to consult your supplier and see if they cannot provide a forklift or telehandler that can maneuver the toilets onsite.

EcoLoo developed a trailer that will be able to move one double EcoBox by just using some pulleys and a winch, but this will be discussed in a later article. 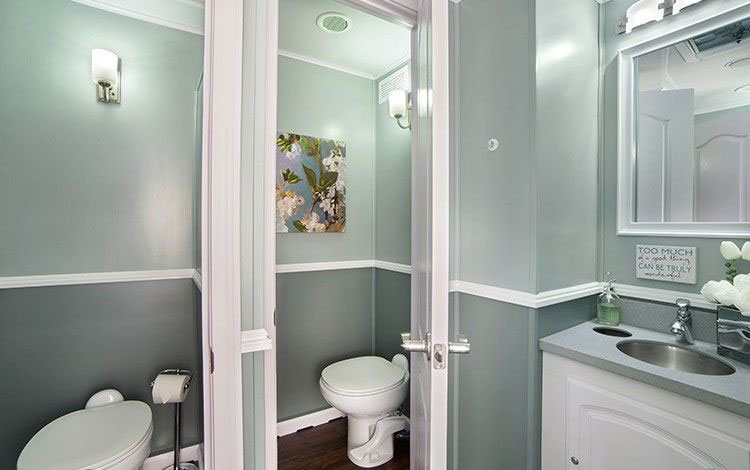 The luxury restroom trailer units are the most luxurious portable toilet solution around. They are fitted out with all the luxuries of any modern bathroom and in some cases can be even more modern than anything you have ever seen.

These trailers are fitted with freshwater flushing toilets, wooden flooring as well as air-conditioning and heating. They come in several different sizes and configurations. You are able to get them with 2 toilets to any configuration up to 10 toilets that include urinals.

They sometimes need external connectivity to function. Some trailers need an external water supply, external power supply and/or external sewage connection. Before booking one of these be sure to ask what is required. In some cases, a generator is required for the trailer to function. So, when you receive a quote don’t think that the rental charge will be the only cost incurred. The generator can in some cases cost just as much as the trailer.

The benefit of these trailers is their luxury and mobility. The heating and air-conditioning also play a massive role in extreme heat and cold.

But it does have its drawbacks. It’s big. It’s normally bulky and quite tricky to maneuver into tight spaces. The connectivity to services also has its downside. Hardly any of these trailers are and can be 100% self-contained or self-sufficient. So, if you have an event away from any structures, running water or electricity or sewage line connections then you might face some issues.

Some trailers are fitted with natural gas or diesel hot water heaters. These need to be checked to ensure no leaks are present and normally requires some leak detection system.

As can be expected these trailers are expensive and can cost anything from $800 to $2500 per weekend.

So, if you are planning your next event you have a choice to make and hopefully after this a more educated one. Whilst balancing cost against luxury you will need to decide which option suits you best.

Taking into consideration the access to the site, the space allocated for toilets as well as the audience that you are catering for, you might be able to rent a combination of toilets to perfectly suit your needs.

Feel free to contact us if you have any questions regarding your portable toilet needs.